When you advertise online, as an advertiser, you are paying to acquire more business or to increase your brand & product exposure or both. The cost of online advertisement is based on what do you expect to get out of it. There are several basic metrics of an advertisement to help you out with it.

If you simply want exposure of your brand or product, then you are looking at the metrics Impressions and Views. If you want to acquire more business, then the metrics Clicks and Acquisitions will suffice.

Besides these basic metrics, there are few additional metrics that are derived from the relationship between them. They help you understand how well the advertisement is working for you. Let’s see what they are.

What Click-Through Rate, CTR, helps us understand is how interesting or eye-catching the advertisement was to warrant a click. The formula for it derives from the following logic; for you to click on an advertisement means you should have at least glanced at it. Therefore you cannot possibly have more Clicks than Impressions and that brings us to the formula.

Example: If the advertisement was showed 700 times and it was clicked on 400 times then you have a amazing 57% click-through rate.

As the name suggests, the Conversion Rate, CVR, gives us an idea of how effective the advertisement was in bringing you in new clients. This metric is a follow on from the CTR, where after clicking on the advertisement, how often did the users sign up of the offer. You can understand that this means that you cannot possibly have more Acquisitions than Click.

Example: If there were 400 Clicks on the advertisement and 225 Acquisitions that means you manage to convince 62.5% of the people who clicked, to sign up for the offer. It must have been a very good offer.

Example: Let’s take an advertisement that has a video in it and an offer attached to it. If the advertisement was seen by the users 400 times, but the video was played only 44 times, your advertisement only managed to intrigue 11% of the people to watch the video. That is not that high, especially if you were hoping to sell advertisements in the video.

When you are advertising, you will generally have a goal that you are trying to achieve. You might be looking to increase sale of a specific product, in that case you could run your advertisement campaign with great offers until you reach 60% conversion rate or you might simply be looking to increase brand exposure and you could be happy with 150,000 impressions.

When calculating the cost for the campaign, the supplier will be charging you per thousand Impressions, Clicks and/or Views. When your goal is to reach 150,000 impressions then we can simply multiply that with the per thousand cost to get to the total cost. However, if you are aiming for 60% conversion rate then you need to calculate backwards to Impressions and Clicks to identify your total cost. It is however not practical to set any of the rates as a goal as you cannot predict how people will behave. The rates are only used as a guideline to estimate your cost in Impressions, Clicks and/or Views. The following formulas will help you do exactly that.

There is a pattern in how these metrics influence each other. 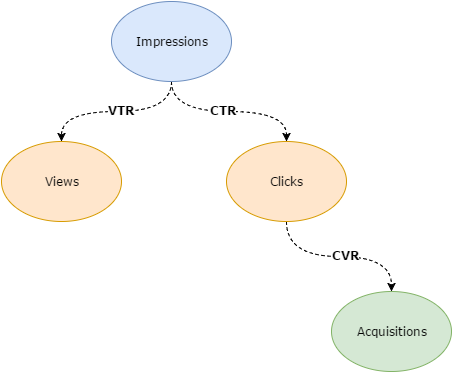